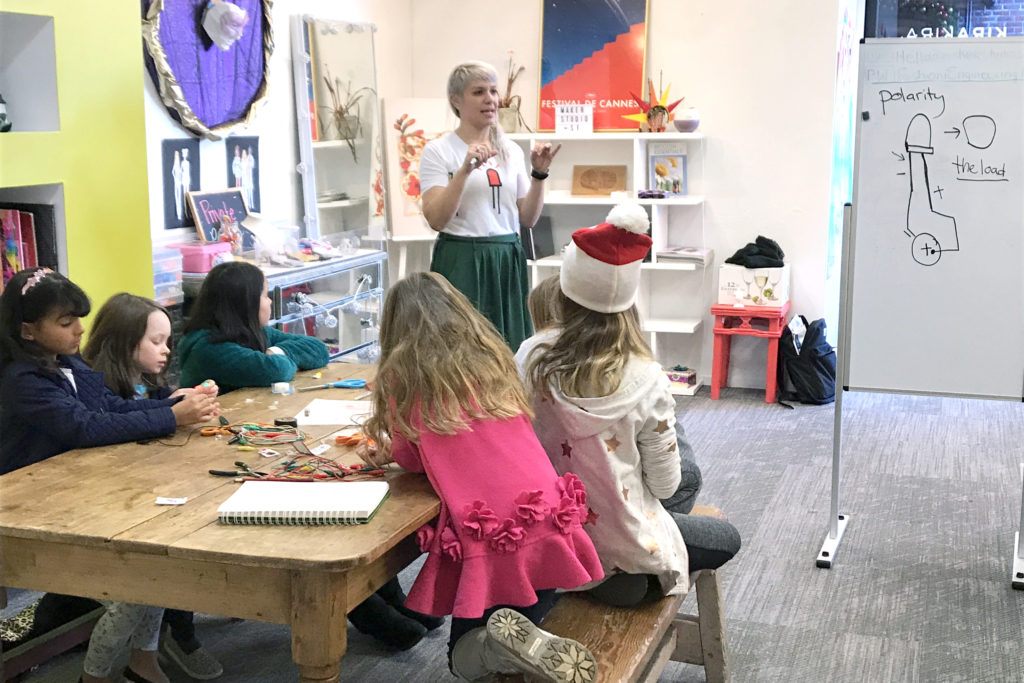 Maker Studio SF is a maker space that focuses on teaching youth, especially girls, technology through fashion. They provide after school programs and camps that focus on the merging of engineering and creative practices, emphasizing that one is intrinsic to the other.

I had the pleasure of teaching the first workshop in their Fashion Engineering Camp program. 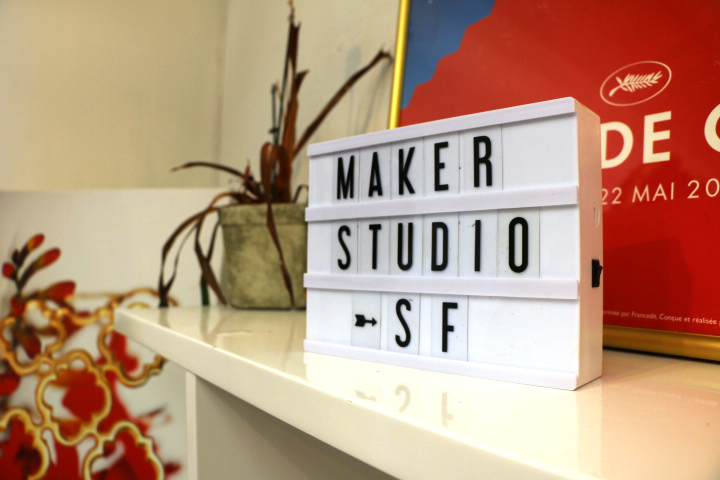 Learning objectives and goals of the workshop:

// What a circuit is, identify terms and some basic electrical concepts.

// Use learned techniques and knowledge to create a larger project around a soft circuit.

Below is a general outline of the workshop with accompanying photos from each demo build. The final circuit build evolved based on the request of the kids wanting to create a plushie. A template for a plushie circuit with 2 LEDs in parallel was drafted. The bracelet and a circuit with a soft force sensing resistor using Velostat was built by the older kids.

One of the children made as many as 5 plushies! The younger kids had a great time lighting up the ears of their plushies with LED throwies. So much so that batteries were becoming scarce. The next workshop will definitely call for more batteries!

Demo build
Now you build one!

Gather observations
What did you notice while building your throwie?
What didn’t work?
What did work?
Why? 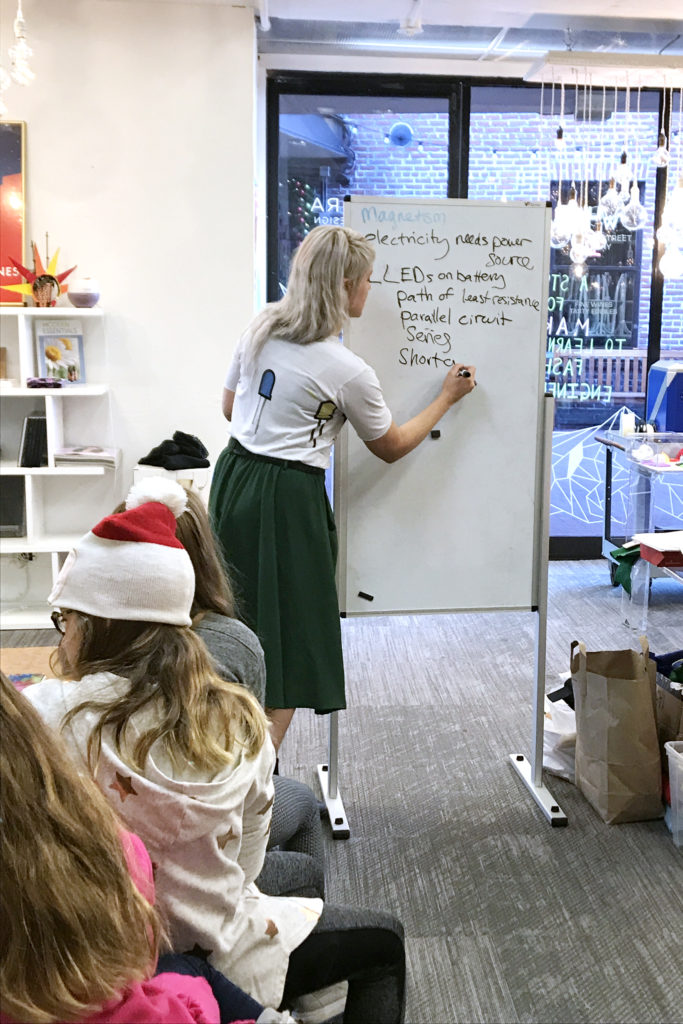 Capturing student observations of what did and what didn’t work while they built their LED throwies.

You already built a circuit!
The throwie is the most basic circuit there is!
Let’s build another and dive deeper into what makes up a circuit.

Demo build
Now you build one!

What is a circuit?
A closed path that electricity travels along.

Parts of a simple circuit

Battery
– Source of electricity
– Power and ground, positive and negative

LED
Called the load, it’s the part of the circuit that is activated or energized from the source of electricity

Introducing the resistor!
Resistor
Comes in different values
How do you know what value it is?
Why would you want one?

Swap Resistors!
(~400 Ohms)
Change the resistor to a high value, what happens and why?

Try it!
What is it doing? 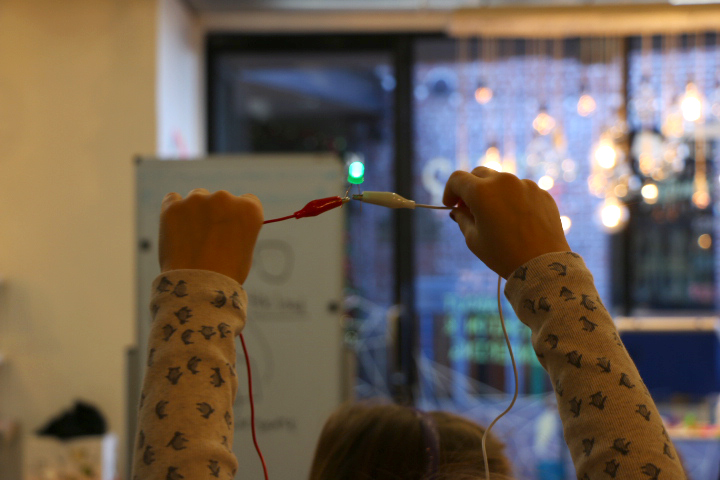 The resistor in your circuit is to protect the LED.
Batteries have different voltages, let’s go up to 9 volts and see what happens to an LED.
Components, like the LED takes a certain number of volts and certain amount of current to light up.
– The potentiometer is a resistor with an adjustable value so I can dim the LED or give it way too much power.

How do we save this LED?
A resistor!

A student anticipates the LED burning out only to learned that it has survived! 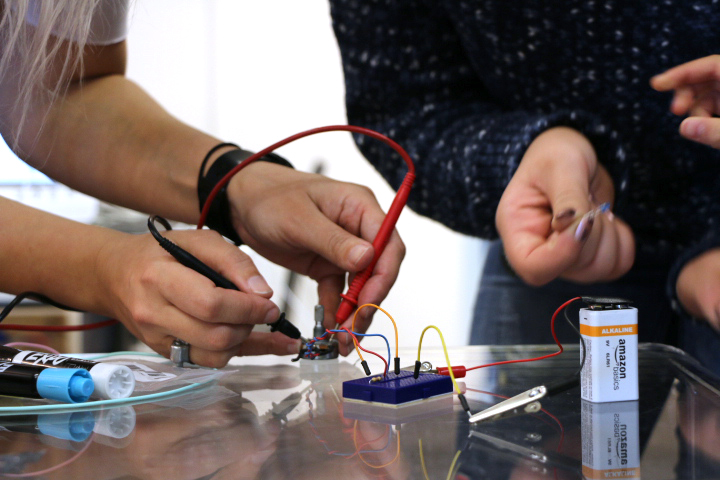 Now you make one!

Introducing Velostat!
Can be used like the hard resistor and when pressed is a force sensing resistor.

Demo build of soft variable resistor.
Demo putting it in the circuit and changing the brightness of the LED by pressing.

Now you build one!

Make a sandwich with the plastic in the middle of the conductive fabric (make sure the silver parts are facing the plastic!) and connect that into your circuit.
Press and what happens? What is changing as you apply pressure? (resistance!)
What happens if just the two pieces of fabric unintentionally touch while you are pressing? (a short circuit!)
You have actually made a sensor! Called a force sensing resistor!

What is an RGB LED?
Polarity review
3 positives instead of one for each color channel
Color mixing

Demo each step, have them do it, then review.

Step 1: Grab Felt and Mark template on felt
– design plushie shape
– decide whether you will make a soft switch or variable resistor

Step 2. Prep LED(s) for sewing
Use pliers to curl up LED legs (mark them so you know which one is ground!)

Step 3. Iron down conductive traces.
Review of iron safety
Help each other out if you see something that should be fixed or is unsafe! 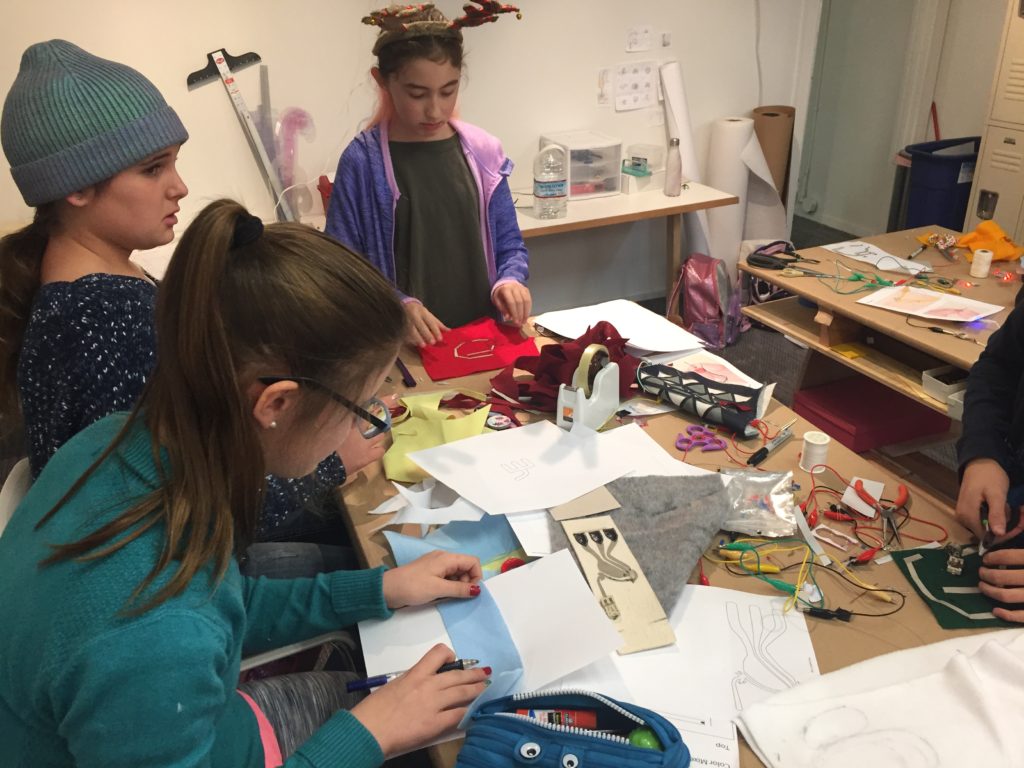